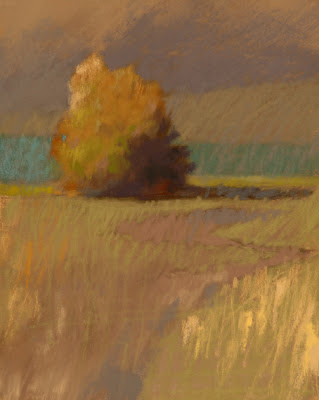 By now you have caught on to the dual nature of particular
elements of art.  Space can mean the 3-dimensional illusion in a picture,
and it can mean the division of areas within the 2-dimensional format.


Space - the illusion of dimension.  Ask yourself if you feel like you can move around inside the painting.  Also, space can describe the division of the area into parts, such as the positive and negative space in a picture.


I use space as a compositional tool by dividing the paper into threes or fives.  This asymmetric division of space, by number, creates tension and interest.  It also prevents the space from becoming too complicated, as with 7 or 10 areas.


Let's keep space and form properly understood, since they are both dimensional by definition. Remember with form, we had three dimensional shapes and also the deeper formal aspects.  The unified nature of all the elements of art is the form. With space, we have divisible areas within the picture, and a sense of the interior area within the painting.


"The air one sees in the paintings of the masters is not the air one breathes," Edgar Degas.


The best use of negative space in recent memory can be found in Andrew Wyeth's Christina's World. 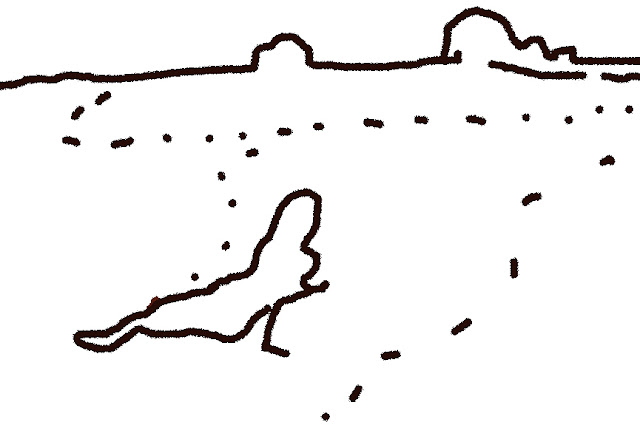 There may be less negative space, by proportion, in an Andrew Wyeth painting than you might first think. The figure takes up one third of the horizontal space in the foreground, or field.

While it is common for artists to add larger areas of negative space to format their pictures, it is also a common pitfall among contemporary artists to use so much negative space that they seem to forget that proportions matter.


Look again at Christina's World.  Draw verticals at her feet and head, and see that she takes up one third of the horizontal area in the foreground, or field.  Now draw horizontal lines and she takes up about a quarter of the space considered on the vertical axis.  As a consideration of mass, how many Christinas would fit in this picture?  Maybe ten.


My observation is that many contemporary artists will overdo the negative area of space, and this without any consideration for what they are trying to say.