Big, horizontal elliptic shapes, like pear quarters or lips, create a repeatable pattern in this landscape.  The rounded shapes in this picture's land-forms are also mirrored by the rounded shapes of trees and bushes.

Pattern is the way you would compose your picture if it were a quilt top.  Lay it out in some discernible motif.  Often, patterns in art can be repeated shapes, and may involve the comparison of shapes, lines and colors. Think of the word: counterpoise.  One shape predicts another.


The Golden Ratio is also a pattern found in nature. 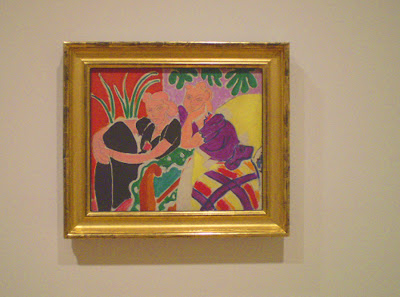 The first artist I think of when I think of pattern is Henri Matisse.  Born and raised in a textile producing region in northern France, he constantly described patterns on wall paper, dresses, and carpets.  Then, he would create an elaborate design, weaving the whole picture into a pattern.


Let's review the elements of art so far..


Consider the image posted at the top of this post, Upland Fields.  The elements we have covered so far in our posts are pattern, line, shape, and form.

Long, horizontal lines are obvious, and the shapes are long pears or lips, which are very organic.  They are repeated to create a pattern. As respects form, there are five horizontal shapes from bottom to top, and three masses of trees or bushes.  The asymmetric, or odd numbered, quantity work to suggest the randomness of nature and the aerial feeling of faded colors, encroaching over the ridge in places, establishes a feeling of upland atmosphere.
Posted by Casey Klahn at 7:27 AM

Email ThisBlogThis!Share to TwitterShare to FacebookShare to Pinterest
Labels: elements of art, pattern