High Tide at the Jetty 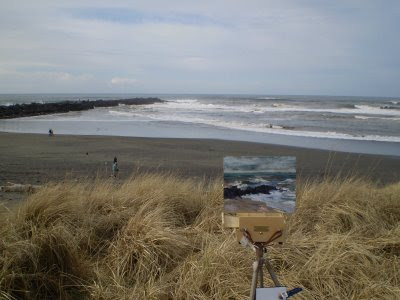 The Jetty in Ocean Shores, Washington.
My Set-Up is the Guerrilla ThumBox and an Ampersand Panel. 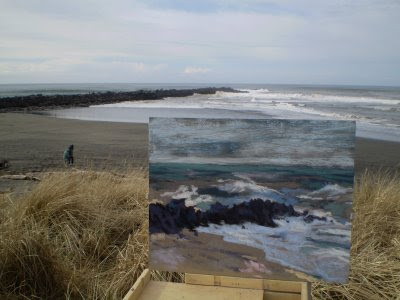 The painting was begun at high tide, but as you can see the tide was going out by the time I took this photo. Interesting how the camera compresses reality - my painting is accurate for relief, showing more ocean above the jetty, but the photo makes the ocean appear flattened.

I had to drive to my home town area this past weekend for a funeral. The art kit went with me, since I have had a desire to do some images from there for some time. Specifically, I want to do a series on the Hoquiam river.

This painting of the wild Pacific Ocean hitting the rock jetty in Ocean Shores, WA has some things I like. The technique of pastel strokes is pleasing. The colors are accurate, it seems. But, an interesting thing happened with this rare plein air session. I had my new large box of pastels, which is organized by hue first, and value second. My smaller boxes are purely organized by value. So, wouldn't you know it? The painting I rendered in this method suffered a little for having incorrect values! I'll keep this in mind for my next efforts, and I'll see if I wish to correct this one in the studio. Live and learn.

As things turned out, the drive was too hard for me this close after my surgery. I know - I should be well by now, but such is the case. I did get some good family and college buddy visits in, but after one morning session at the beach, I was wiped out. I tried a second session at the mouth of the Copalis River, but circumstances and wind got the better of me.

Not to despair, though. I did take my camera with me. More importantly, I had my eyes, too. Paintings will follow.
Posted by Casey Klahn at 9:41 AM

Wishing you a speedy recovery after the long drive, Casey! I can't bear being in a car very long at all, and that's even without any surgery.

Casey, this is looking really good.
I found the comment about sorting your pastels by value very interesting. I searched through your older posts looking for more info about that, and maybe even a picture of your pastel box (which I'd love to see if there is one), and got lost for a while reading all the great information in this little goldmine. Thanks for all you put into it.

Jean, the post with my big box (by hue) is here: http://pastelsblog.blogspot.com/2008/07/big-palette-for-plein-air.html

I plumped it up with more pastels just before the trip, too.

I like the power you caught in your painting. It is so like I remember the place. Hope you have recovered from the trip.

Thanks, Miki. I'm better today, but still just a little off. I am in the pool for P.T. on Thursdays, now.

When I get a few more marks on this art, I'll try to get a proper picture posted.

This is a figurative (may I say that about a landscape?) aspect of your work, I've never seen Casey. Vital and lively. I'm very much looking forward to seeing where this visit to the coast takes you.

I'm sorry to hear that you are still having to take it easy. It's sensible though but very frustrating for someone who loves to be active.

Casey, I hope you are feeling better. I was delighted to see this plein air piece. Plein air work and observation feed the soul for stronger studio work. Your color choices here are fresh and harmonious. I can't wait to see what happens with your new ideas.
Maybe let this one sit in the studio and it will tell you what to do.
To your health! Loriann

Thanks Robyn and Loriann. Yeah, Robyn, my divergence in styles is a pickle. The realist/figurative things that come out of some of my plien air work hearkens back to before my methods before I started doing New School Color.

I am only now starting to succeed with plein air work, so it's all discovery for me. One interesting thing is that my recent successes have been based on returning to the same location and working through pictorial issues over time. This scene was an instant, one session thing. Of course, I grew up on the beach, so that helped.

Love this one! The mix of abstraction and reality, both in color and line, is just right.

I enjoyed this post - your lovely painting as well as the experience - I could almost feel the breeze. I'm going to have to make a drive up that way in the future, I guess - maybe when the passes are clear.

Wishing you a healthy, speedy recovery, too.

Thanks, Sue! I finally got the proper photo of this one up at The Colorist if you haven't seen it, yet.

I have stood in this exact place near the Jetty many times--I'd love to see a closeup of the finished work!

Blogger wont take my link today, so here is the cut and paste. My Jetty image in full is:

Thanks, Nancy. Details of this are crude, as it is on marbled board - but the whole works makes the pic.