Ed Grimley was obsessed with Pat Sajak. Am I completely mental over Wolf Kahn?
"Give me a break..."
Recently I have been introduced to Stumble Upon. The following review has been written about my art:

The landscapes are beautiful and the colorist also does some vibrant experimental art. He also has some notable avid fans. A fun blog to read.

I appreciate that, Chris. I never thought of the word "experimental" for my art, but I like it. That gives me the idea to try some things that I've been thinking about for quite a while. Another motivation has been thinking about artistic courage, which has been the subject at The Colorist lately. See Art Medal, and Jafabrit Wins Award.

This leads me to my latest project, which is a series of Wolf Kahn inspired pastel drawings. Now, you may be thinking, "Holy cow! Casey's whole ouvre is Wolf Kahn landscapes!" And you are right, of course. But, I have been focused on creating pastel landscapes that are influenced by Kahn's colorist oil paintings rather than his loose and scribbly pastel drawings. A number of other things separate me from the master's style.

But, recently I read a book on classical drawing where the student is to full-on copy masterworks. And, the man himself, Wolf Kahn, openly accepts that he will be copied, too.

So, I am embarking on a little experimental time where I am going to copy his drawing style and images until I feel ready to engage the style with original scenes. I want to get loose with my marks. I want to focus on the overall composition of the masses and create striking color sets, without a care for "perfection". WK is more "about" the landscape than my opaque landscapes are, I think. I want to explore that, too.

The key is that these copies are never for sale. I once did an art fair where a certain artist flat-out copied other artworks from postcards and whatnot. He did it right there in front of God and everyone, and then put these large format oils up for sale. (It was an every weekend show, so we watched over time)

We other artists watched as patrons strolled in and bought up paintings of Mother Theresa and zoo tigers that had not a bit of originality or authenticity to them. Some of the artists complained, but the city chamber (the organizers) knuckled in to the artist. Apparently he was quoting some law that reads that art must be at least 30% "different" to qualify as original. Hello.

Anyway, in the land of professional artists, we don't sell our work that is copied for academic reasons, and we don't sell or compete with art that was produced in an academic setting.

Paper has been the subject of our latest inquiry into WK's pastel works. I went to the studio this A.M. looking for a Raffine Pad that I thought I had. Instead, I found a pad of 120 gm. Cartiera Magnani, from Italy. Good enough. Then, I went to work on the following drawing, after Wolf Kahn. 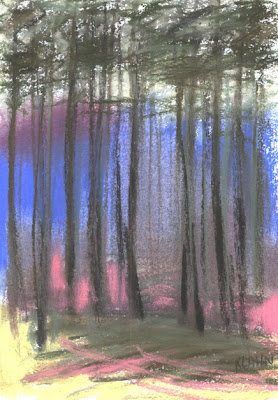 thanks for the mention. I enjoyed your post and pic of grimley LOL!

"I must say," Ed would reply, "that is like a totally decent thing for you to say."

This looks like a fun project. I'll be following along.There is alot to laern from doing "in the manner of" work and you've given me the bug.

Because it's process stuff.