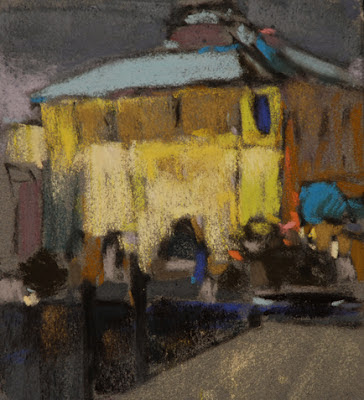 Massing all of the darks at the bottom left solidifies the impression of water and weighs this area down.  The gray promenade at the right foreground is close in value to the shadow side of the hotel, optically tying these two elements together into a bigger space.  The slightly darker, battleship gray sky asserts a downward pressure also creating a gravity to this building scene. The big yellow facade covers the same amount of area, generally, as the other divisions of space just mentioned, and the turquoise roof matches the facade's value, effectively massing the two parts as one.  Big masses, defined by their values, make for a simply rendered scene.

John F. Carlson said, "I don't believe a painting ever failed for being too simple."


Mass drawing is used to create an object in space, but here I want to address the massing of values.  Massing values is a method for keeping your value scheme both simple and unified.  I know I need to write about unity, but we'll save that subject for later.


To put "massing values" in negative terms, it means not breaking up a mass, or shape or group of shapes by organizing too many values within it.  This is done by putting darks, mid tones, or  lights each in a generalized area.  Each value group may either create a separate mass, or they may perhaps be touching or at least relating to one another visually.


Again, the idea is to create large shapes in order to simplify.  Massing values is a way to adjoin shapes, to make many objects appear as one on first glance.


Look for the shapes defined by masses of similar values. Squint your eyes to lose the details, stand across the room or look into a mirror to see how all of the dark places form one big interlocking piece, as do the lights and the mediums. Rearrange these shapes to achieve a pleasing pattern of values, massed together into a composition.

Be in control of your value masses to clarify, simplify and unify your art.

It is a great job to ... A great view - A good implementation. Best regards, ECO/Finnish/Kuusamo Lapland