The Abandoned Barn Study has been a goldmine for me in the analysis of composition. I thank Brian McGurgan for giving me that opportunity. The study has led us to look at things like lines that lead us around, into and out of our picture plane, the weight of masses, and the plastic element called "push-pull" by Modernists. See Hans Hoffman.

Hoffman declared the reign of "one point" perspective (linear composition) to be over. He proposed color, light and shape as elements that not only lead into a picture, but also push back out of the plane. Ready for some interactive fun? Go here for a color puzzle illustrating Hoffman's Push-Pull Spatial Theories.

Add Hoffman's theory to your linear perspective rules. Now, understand the application of lines, intervals, colors, values and other elements in the picture plane to lead the viewer's eye where you want it to go. If the sky is "heavy" with darker values, the eye will feel it's "weight" pushing the picture elements down.

Let's have a look at some examples from my own drawings. Do you think in color when you draw with pencil or charcoal? If you are a painter, you should. It will effect the outcome of your gray scale drawing. Maybe this will become evident as you look at this combination of both colored and black & white drawings. Again, we're using a definition of a drawing as a picture leaving some ground/paper showing. 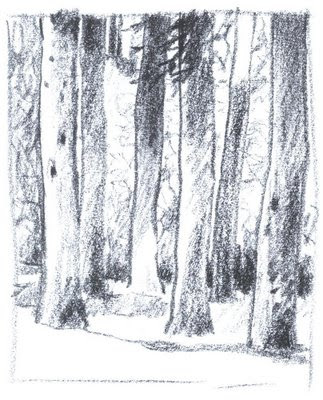 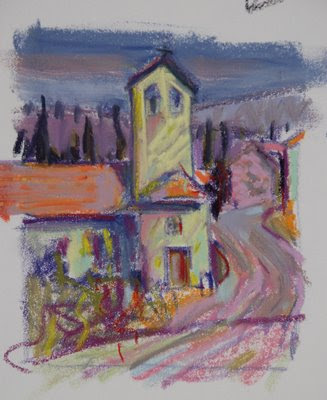 Behind the Garage, 7" x 8.5", Graphite on Sketch Paper
Casey Klahn 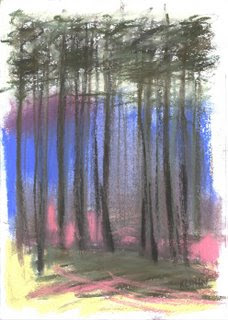 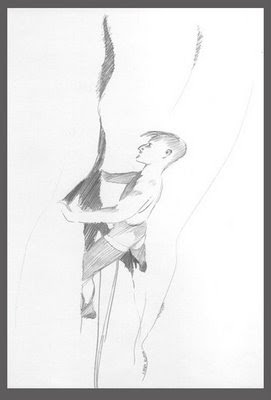 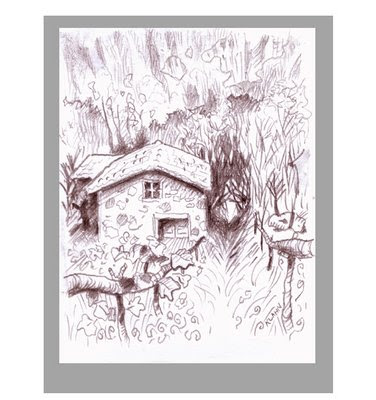 The Portal, 4.75" x 4.5", Graphite
Casey Klahn
Now, look at my analysis of how sometimes linear, and sometimes values or colors push the viewer's eye around the picture plane. 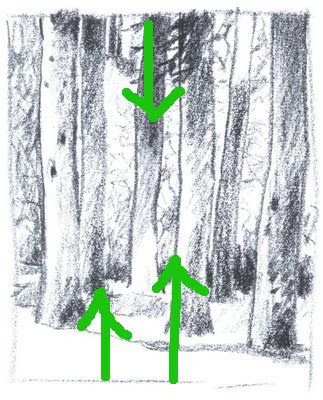 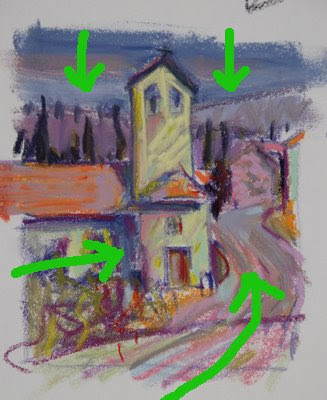 Dark value sky colors push down; light foreground pushes up and various lines lead in.
Blue (cool) recedes; pinks, yellows, oranges and violets are warm and proceed to the front. 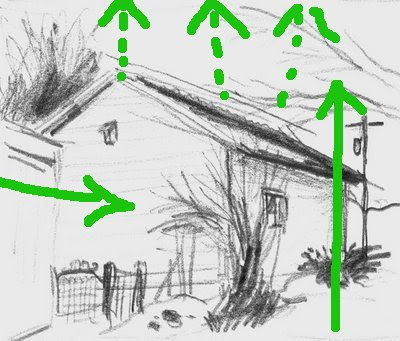 It was tempting to make the winter sky dark, and the shingle roof dark as well. Instead, I remebered the push-pull theory and helped the eye heavenward with lines, mass weights and open, light values in the sky. Part of the roof was left light. Diagonal lines lead in from the left, and various vertical and spiraling lines disrupt and stop you inside the picture plane. They help to lead your eye upward. Notice that the interval of sky need not be large, because so much help is offered by the push-pull methods - this allowed me to keep the garage big and prominent. 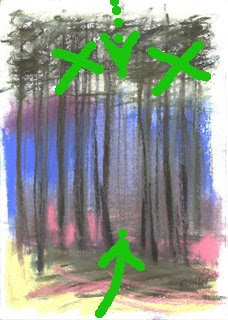 This was directly copied from Wolf Kahn when I did a study of the contemporary master. Interestingly, the light foreground, with open lines lead in, and the hatched tangle in the upper area serve to catch the eye - partly stopping and only pushing down gently. 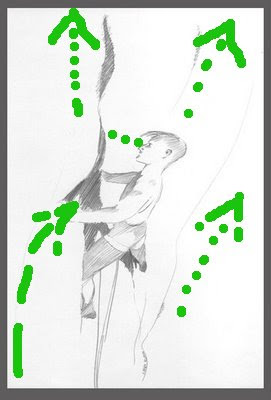 The environment of vertical rock is hard for the flat lander to visually process, so understand that here we have a lead climber on a vertical cliff that begins to overhang above him. He is intently focused on the rock before him, scrutinizing his next options. Don't get dizzy!
Our climber has more interval overhead than below, and yet he still gives the impression of being high off the ground. The lines opening up, and the simplicity and lack of detail help this effect. 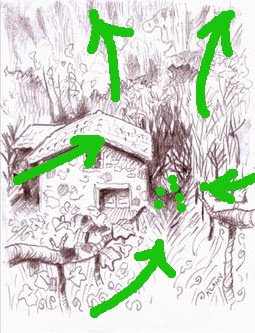 Here is the most complex drawing shown as far as perspective is concerned. Obvious lines lead one into the picture and downhill along the path, then through the portal in the tangle, and then across the void, or canyon, and up the rock cliff. Important roof lines also bring the eye in from the left.
The "bending" viewpoint is a curvilinear perspective. In this drawing, I have offered a type of curvilinear perspective. My brain hurts, now. Reference here.
There is an interesting story that goes with this image, referenced here.
Posted by Casey Klahn at 8:56 AM

great post Casey! I really enjoyed this one (sitting nodding head in agreement!) - so well considered and a creative and interesting look at the subject.

Thanks for reading, Vivien.

Nice demo. thank you. Now if I can remember to do it in my work. I loved the Hans Hoffman puzzle. I saw one of his exhibits many years ago on
color. I did't understand it then, but do now. (at least I like to think I do).

Thanks for reading, Merriel, and nice to meet you.

I've read back through this post a couple of times since you posted it last Friday, Casey, and think it is really very helpful. Great examples, and your commentary and Photoshop edits make for a very clear lesson. I'll continue referring to it as we get into color studies for the barn and have also been thinking about these compositional elements on the other work I've been doing recently. Great post!

Thanks. I'm going to use it in a drawing class, so am thinking about paring the image with the annotated image on the same jpeg in a side by side format. I would still begin with the raw image, then present the paired jpegs.